Have finally gotten around to uploading a handful of photos from Europe. Nothing too much, haven’t been taking a great number of photos – will take more from here on in, promise.

I’m now in Regensburg, in what has turned out to be a bit of a crazy city. Lots of students, lots of stuff happening. Feeling a bit slow today, after a rather late night out last night.

Ended up at a place that seemed to be like something like what a 1980’s student bar might have been like. Rammstein, AC/DC, G’n’R playing, people wearing Metallica shirts, that sort of thing. People were falling over drunk, but all security would do is prop them up, rather than throwing them out. I saw one guy fall over at least 4 times, all seen by the bouncer, who let him stay. Oh and did I mention that you have to push a buzzer to get let in the door? Not sure why, but it was a good night out.Just as well I’m having a rest day though, as I didn’t get back to my hostel until 5am. Good thing it’s an independent hostel, and they don’t kick you out at 10am.

Have been getting my guidebooks sorted out for the next couple of legs of the Danube bike path. Only about 600km from Passau to Budapest. There is now a book available for the last part of the Danube, Budapest to the Black Sea. I will branch off the Danube before then, and aim for a more direct route to Istanbul.

Here’s a photo I took at my lunch stop the other day: 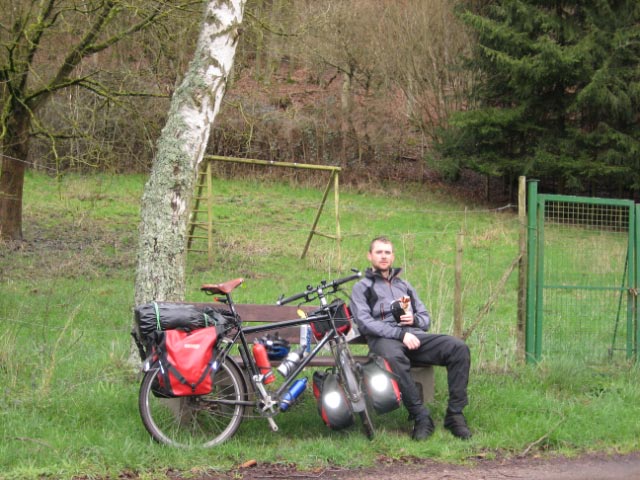 Already looking much rougher than when I started.

Now coming at you live and loud from Aalen, Germany. Have covered a lot of ground since my last post, passing through Luxembourg, and deep into Germany. Been on the road the last 5 days without rest, so today I’m taking it easy, and not planning on doing much.

After Namur, I pushed through the drizzle to Bastogne, along some fairly major roads, although most had a little lane on the side for me. Bit of a long tough day, and I was glad to get into the shower. From there I visited the memorial to the American forces involved in the Battle of the Bulge – I was all alone there on a cold, grey morning – just a pity it was too early in the morning to visit the Historical Center.

Through Luxembourg I mainly followed some of the nice (and unexpected) bike paths. Old railway lines are always nice, with great gradients. I tracked down along the German border, along the Sauer river, before finally crossing over the next day, and taking the Mosel river to Trier.

Yet more rain out of Trier, along the Mosel, then up and over the Hunsruckhohe, to Fischbach. I had been seeing all these signs up on the bridges, indicating what speed tanks could go over the bridge, if they were only going one way, or both ways – I didn’t really understand why they were there, until in Fischbach a Polish woman married to an American soldier told me of the huge US Army bases in the area.

I then came down out of the hills, and onto the Rhine plain, where I camped for the first time. Was good to get the tent out, and to cook a meal on my little stove. The sleeping bag was warm and toasty, and the tent well withstood the wind and rain in the morning. Luckily the wind the next day was a tailwind, and I roared across the Rhine plain to Ludwigshafen.

Germany has many bike paths, some long ones across regions, others just shorter ones across towns. It’s easy when crossing a city to get mixed up, and that’s what I proceeded to do. It took me far longer than was really necessary to cross the Rhine – I knew it was right there, but couldn’t quite see it, or work out how to get across. Eventually I worked it out though. I wanted to stop in the middle and pee into the Rhine, ala Patton, but I didn’t think the local burgers would have taken too well to it.

From Mannheim I joined the Neckar bike path, following it up to the edge of the plain at Heidelberg, and into the hills. I was riding along the path, feeling pretty tired at the end of the day, and thinking about where to stop, when I just about rode into the river – the trail led to a ferry crossing. I’d missed the last one, and was faced with a choice of backtracking 10km, or heading up the narrow steep road, up out of the valley. For some foolish reason, I decided to head up the steep hill – probably took me 45 mins to get 5km up the road. From there it was a nice downhill back to the river, in the fading light, all to get perhaps 2km up the river Would have been much better back tracking, but such is hindsight. I met a nice guy the following day who often rides in the area, and he said even he sometimes misses the ferry, even though he knows the departure times – but he knew it was better to backtrack.

Further up the Neckar the following day, then I joined the Kocher path, which has taken me through to Aalen. A beautiful Sunday, the first real taste of spring, had nearly every German and his dog out on roller blades, bikes, Nordic walking, everything. So nice to see a country of active people, unlike the UK, where faced with a beautiful Sunday like that at the the start of spring, they would have driven to IKEA. My personal favourite was the pair of yummy mummies I saw on roller blades, pushing three-wheeled prams. One guy told me they’ve all had to adapt to roller-blading, since they couldn’t do any skiing this year.

So hopefully tomorrow I can reach Donauworth, then follow the Danube bike path for a fair way. Not sure exactly when I will next rest, perhaps Regensburg. Will see how the legs feel. Only my quads are sore, everything else seems OK, which is a good thing. No joint issues, only muscular soreness.

The beard is coming along well. A few days growth in France seemed to appeal to the French women, but now I seem to be attracting weirdos. Yesterday while waiting for the hostel to open, a guy came up and asked for a light. While hunting around for some matches, and talking to him, he suddenly let out this weird moan for about 20s, then resumed his conversation, as if nothing had happened. He sat down to smoke his cigarette, after fumbling with the matches, dropping most of them, and eventually throwing the pack away. He then sat there laughing to himself about nothing for a while, before shambling off.

I am enjoying being in a country where I can speak some of the language. I have had several conversations with people who don’t understand any English, which is no doubt helping my German. A lady yesterday said I spoke very good German, but I do think she was being polite.

Hope all is well out there in the world – things are great on the bike, although I am concerned about the snow forecast for later this week…