It’s amazing how quickly things change. I woke up in El Chalten, in the mountains, to drizzle. It would probably rain all day. By nightfall I was in a place that receives only 20mm of rain per year.

I had been considering a day off in El Chalten, but listening to the rain I decided I’d had enough of it. I knew I didn’t have far east to go, and within 10km I was pulling off the raingear. I was also riding on pavement for the first time in a couple of weeks, with a strong tailwind, and a gentle downhill. Very, very easy going, and such a change to the last few weeks.

The countryside changed very quickly, from lush forest, to dry country. Not many houses, to almost none. Just a few estancias along the way. The estancias are a mystery to me. They are generally large, with multiple buildings, and they appear to control a large area. However, I saw almost no sheep or cattle in the ride from El Chalten to El Calafate. A few horses, a guanaco, an armadillo, but only two sheep. Where are they all? My guess is that there used to be thousands of sheep, and large sums of money were made, but they destroyed the land. It’s too fragile out here, and when the sheep eat the grass low, the soil just blows away in the relentless wind. It will probably take thousands of years to recover.

Some people struggle with the bleakness here, but so far it’s OK for me. There are still mountain ranges, glacier fed lakes, and a handful of buildings. I’ve seen much, much bleaker than this.

I’m joined by Marko today, and we have a very easy ride for the first 90km. We then turn around the end of the lake, and it’s a different story. The wind is hammering us, pushing us all over the road. Thankfully there’s little traffic. After 20km of that, we stop at one of two places to stop along the whole 220km, at Hotel La Leona. It’s a very nice place, and we’re grateful when we shut the door and get relief from the wind. But we know there’s another place 10km down the road, and decide to push on, since we know the next day will be tough. So we just have cake and a drink.

Down the road we get to Parador Luz Divina (Divine Light), where it seems the proprietors are chasing a different sort of divine light. It seems to be run by a bunch of stoners, and is not so fancy, but it ends up being a good place. I would prefer if the owners spent more time clearing up the dead cattle and empty beer bottles from the camping area, than getting stoned. Walking around inside with a hoody on and wearing sunglasses is a bit odd too. But one guy speaks English, and is nice to us. I have a shower under a dribble of water, but at least it’s warm.

A couple stay in the hammock near our tents, talking and giggling all night. I don’t understand the way the locals manage time. It’s not that hot at day, so why sleep all day, and do things at night? Doesn’t make sense.

The next day I fill my bottles with very silty water – but it’s silty from the glacier feeding the lake at the other end, so it will be fine to drink. We set off early, knowing it will be a long day. Starts out OK, but then we climb, straight into the wind. At the top is a gentle downhill, but I can’t roll down it – I have to pedal, or I won’t move. But we can see the road turning just ahead, and crawl towards it. Speed again, and on a longer downhill I hit 73km/h. The road turns ahead though, so I brake, knowing that if I’m going to fast, the crosswind will fling me over the corner.

We all stop for lunch, Marko and I, and Neil and Victoria, a Scottish/NZ couple riding this way. We’re sheltering in a ditch, apparently also used as a toilet, to get out of the wind, before the intersection where we turn directly into the wind. We’re all apprehensive about the next 32km.

Can’t be put off forever though, so we try and get it out of the way. It is a ridiculous headwind, at least 40km/h, and we can barely move into it. Sometimes we’re reduced to pushing the bikes. One couple of cyclists will stop for a break, 10 minutes later you can still see the others, only a kilometre ahead.

All I can do is put my head down and focus on the white line under my tires. Sometimes 4km/h, occasionally up to 10. Drafting helps, but it still hurts. It will take us 5 hours to cover the 32km into town. Reaching the municipal campsite, we’re all shattered. You’re happy to have made it, so don’t quite realise how tired you are at first, until later that night, when you’re falling asleep at the restaurant. We all slept well.

I’ve been having 3 days off in El Calafate, preparing for the next leg, which will probably have both headwinds and tailwinds. The best I can hope for is light winds. That or I could head east to Rio Gallegos, instead of east, south, west to Puerto Natales.

While here, I went on a daytrip to Perito Moreno Glacier. This is the main reason for this town existing, and it really is remarkable. Just an enormous river of ice, 5km wide, 60m high, 30m long, and moving 1-2m per day. I’ve now seen a few glaciers on this trip, but this really is the most impressive. You might just be able to make out a boat to the right of this photo: 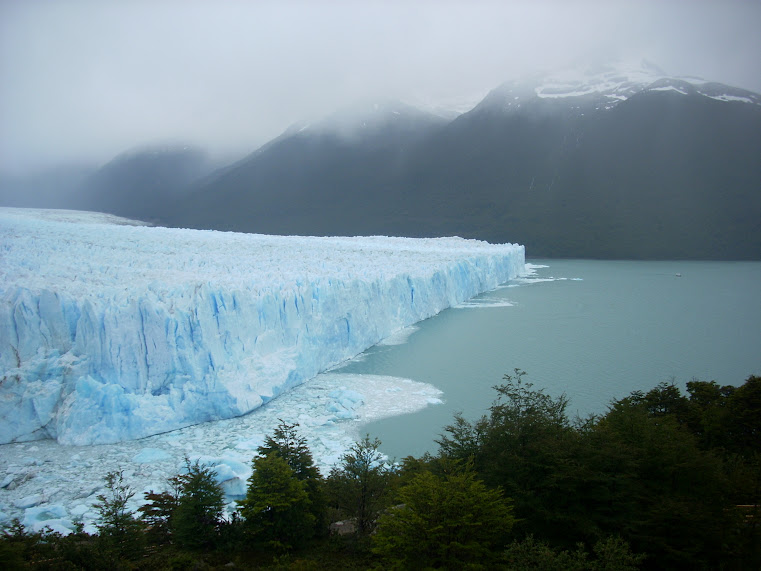 That’s quite a large catamaran (at least 65ft), but it looks tiny.

Photos from the ride to Calafate here, and a few of the Perito Moreno Glacier: